It all started as a normal Wednesday. I was home from work for my regular lunch break. Little did I know, John was on his way to my house to schmooze talk to my parents as I was leaving. Talk to them about me. and him. and us. and us forever. Asked permission–they said yes. He planned to wait to propose until next Tuesday.

On my way back to work I left John a message (I was thinking he was in a meeting or something) to say I no longer had plans for the night and that we could do dinner and such. John responded later with a text “want to go for a walk on the beach?” Rewind to Monday, when I went running on the beach and suggested to John that we go for a walk on the beach soon. Back to Wednesday. I responded to his text with a YES!!! I thought he was being nice–taking me to the beach because I had begged asked nicely Monday. Which, he was, but he had a bigger plan in mind. We eventually decided we wanted to swim, too.

After work I made my way to John’s house, hopped into his car and we headed to the beach. John says he was nervous, but I couldn’t tell. I also wasn’t looking for it. We decided to find a spot at the beach that wasn’t so crowded (it was prime surfing time)–so it took a bit of searching to find a place with a few open spots. We didn’t park near a boardwalk, but we did park right at a neat path to the beach–through the plants and in the shade.

Let me also mention at this point that I am wearing a bathing suit, a camouflage hat, and a shirt from Striplings Sausage & General Store in Cordele, GA. Nice. Just what I always imaged I’d be wearing when I got engaged–haha. 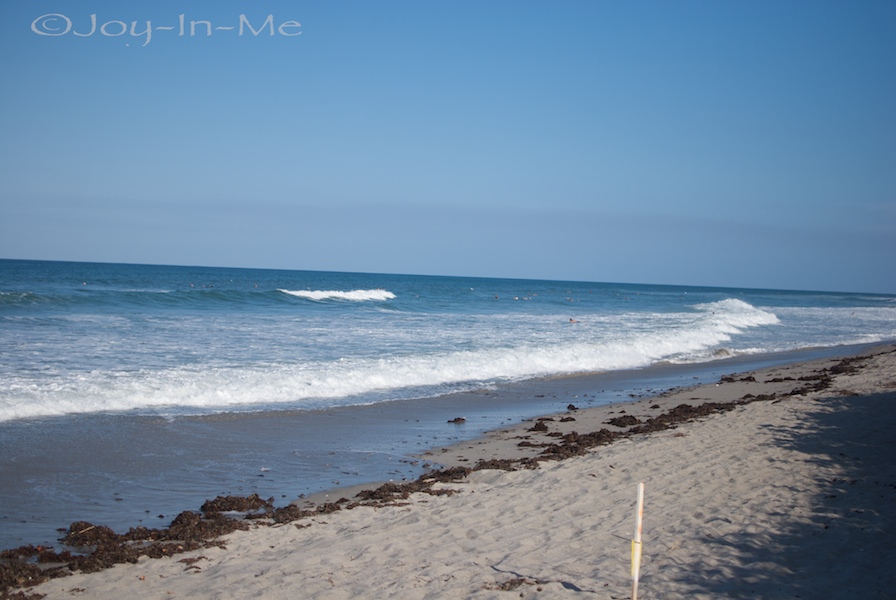 We reached the sand, took some pictures, and decided we would go for a swim. I told John I wanted to put my camera in his backpack (should have been clue #1–the backpack doesn’t go anywhere but Disney), but he said “no, I’ll do it.” I (confused), handed over the camera and asked him to get a towel out of the backpack.  As he was pulling out the towel I heard a klunk klunk (glass). I immediately said “what is that?” John, of course, said “Oh, nothing.” “Yea right, what is that!?” “Nothing–I’ll show you later.” “Noooooooo please tell me!! There’s no point in waiting–I’ll just bug you until you tell me.” “It’s for later, it’s going to be funny, just wait.” “Whyyyyyyyyyyy–what is in your bag?!?” [I’m not thinking proposal at this point–just wondering what glass is klanking around–wondering how he is planning to use it to embarrass me or something] Anyway, he eventually gave into my annoying nosiness persuasion and obliged. 🙂 He then came over to me, took me in his arms, and began to share some really heartfelt and meaningful words [yes, a big awwww should be inserted here]. He started crying (shhh), at which point I realized what was going on–and promptly started freaking out (a very good freaking out). He proposed, and, amidst tears and laughter (after realizing my nosiness probably ruined a big plan he had), I said “yes, of course.” We then spent a good while talking, laughing, crying, being goofy, and enjoying our first moments of being engaged. It wasn’t until about 5 minutes after he proposed that I really cried a good, happy cry.

The klunking in the backpack was champagne. Not only did we get engaged, but we broke the law by having open glass containers. Woo.

We had major camera issues (my mind was not on ISO setting), so the number of pictures we have of us is slim to none. Here’s our best self-timer shot:

This, here, is my fiance, John. Taken in the back window of his car.

He surprised me. Big time. I may have ruined his big plan, but everything (despite the fact I was nosy) turned out to be perfect. I’m not sure how John was thinking he was going to wait until after we swam, went for a walk, etc. Sneaky sneaky.

We have NO idea what went on around us–not sure if people were walking by or if dogs were running along. It was just us. Together. Sharing an incredibly special time on an incredibly gorgeous day. We are so blessed, so happy, and are excited to join families and begin the journey of the rest of our lives together. We told John’s kids in person tonight–they are as stoked as we are and celebrated with burgers & a bit of sparkling lemonade. Such fun ahead!

Last night my dad made us dinner–then we went out for ice cream with my parents and Price. Was fun 🙂 In the meantime, we managed to forget that my car was at John’s house–and when we went to pick it up after ice cream, I realized the keys were in my purse back at my house. Woops. My mind was clearly elsewhere–and I think it’ll be that way for a while), but I’d say understandably so! Woo hoo!

Hi. My name is Sara and I’m ENGAGED. We are sooooooooooooo happy and excited.

So there’s our story. We like it–especially the humor we will enjoy for the rest of our lives thanks to my crazy self. I yi yi.

…John’s side of the story to come (hint: the ending is the same, in case you were wondering).

Much much joy and love,
Sara

P.S-we have not yet set a date, but we will be getting married here in good ‘ol Palm Beach Gardens.